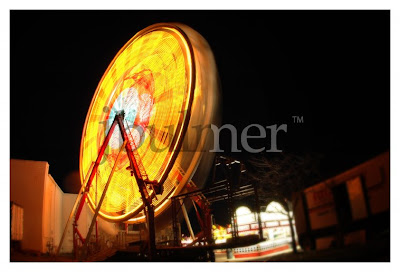 In the early morning hours, strange, traveling cities appear in parking lots and empty fields. They appear much like crop circles, something man made with a covert delivery that camouflages a less than mystical back story.

Carnivals transform the empty spaces at the edges of the suburbs into something that is both magical and trashy all at once. These tiny, self-contained cities of fried dough stands, Whack-a-Mole booths, and flashing lights seem to spring up overnight. It is a proven business model that will attract people from three counties and try to tempt them with riches won from throwing a ping pong ball into a fish bowl at 10 feet. 'Hey you with the pretty lady, be a man, try to win her a stuffed monkey." A true standard of one's devotion.

The very DNA of a carnival is foldable, packable, and drivable: low-fi Transformers that plug into orange extension chords that play canned organ music. It is a world that is transient and fully retractable by necessity.

As a kid, the carnival's arrival always signaled the end of summer vacation. As an adult, at a distance, the lights of the Ferris wheel and Tilt-a-Whirl look like a mirage of childhood wonders. Up close, the rides look like shit can contraptions that are at best marginally maintained and controlled by bored looking roughnecks in NASCAR apparel.

Memories of the end of summer are triggered with the smell of cotton candy, fried food, and popcorn. The local carnival was the last stop before we returned to the structured environment of school days and schedules. We all knew a good thing had come to an end, and this was our one last night to live it up. The last chance to live to up the way 13 year old boys do: to antagonize the girls we liked, eat shitty food, and ride the most rickety, dangerous rides we could find. Bonus points if all three were combined into one.

I forget just when exactly I stopped going to the alter of cotton candy to celebrate the summer's passing, but I have a feeling it has something to do with the massive infusion of hillbillies and country music that has come to be the trademark of Carny life. Today, the hip hop wannabe's and pseudo-cowboys occupy the same midway with knock-the-chip-off-my-shoulder, don't-scuff-my-pumas bravado. Carnivals are amazing examples of just how similar urban and rural cultures are to each other.

I remember the last time I actually sat on a ride at a carnival by the music that was playing. It was the summer that the Beastie Boys released Intergalactic. Checking Google, the single was released on . This puts our time line at approximately one month later. I was on a date with a girl with whom I would soon forget. We were riding one of those swing carousels made famous by either the countless internet posts of lost limbs and head injuries, or the stock photo on the first Dave Matthew's release, Under the Table and Dreaming (I can make the argument that both examples are equally painful.) As the ride gained momentum and the chair swings were carried out by centrifugal force, the Carny landscape unfolded as a haphazard shanty town of souvenir booths and odd attractions. The ride provided a look behind the airbrushed and blinking facades that seemed to hide a seedy infrastructure. As we arced higher, we could see directly into the ride parked next to the chair swing, The Viking’s Castle. Probably not part of the ride, but infinitely more entertaining, was a thin, shirtless man with a farmer’s tan and a Viking headdress, kissing a woman who was seated on a folding table. As we orbited over the carnival, with each rotation, another piece of clothing would disappear until all that was worn between the two of them was that headdress with the fake plastic horns. Carny Thor was oblivious to the 50 people orbiting 30 feet over his head as he played out his dingy He-man Master of the Universe fantasy. Near the end of the ride (ours not his) he raised his hands in victory, punctuated by two metal signs (sometimes called Hook'em Horns) at the heavens. Very, very heavy metal. It was like watching a parody of a parody of a Led Zeppelin themed piece of performance art.

That almost 11 years ago, I can’t listen to Intergalactic without thinking of that day.