The Capital Region After Us. 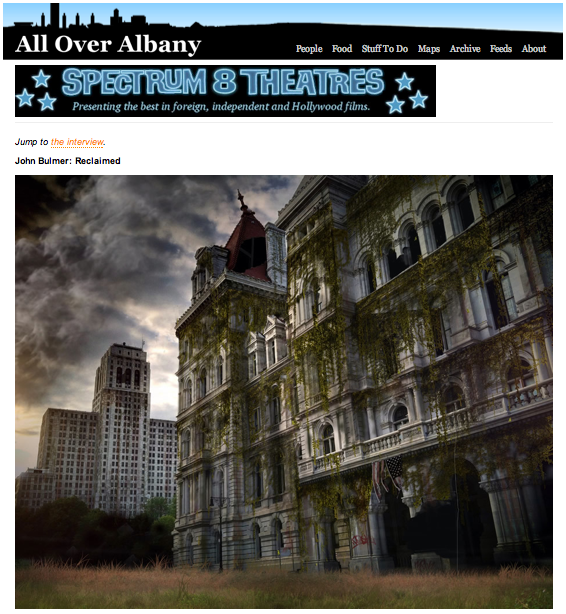 Read the story on www.alloveralbany.com.

Have you ever wondered what the Capital Region would look like if everyone just disappeared? Whether it was from zombie apocalypse or mass exodus, the landscape would certainly change if we weren't around to mold and maintain it.

Photographer John Bulmer has taken this idea and turned it into two series of remarkable of photo illustrations. His Reclaimed series imagines an abandoned Capital Region landscape after a catastrophic situation. The Dark City series is a little more peaceful, imagining how our region would look at night without artificial light from sources such as buildings and streetlights.

The images in both series are eerily believable.

What's your background in photography? When did you get started?

I've been a professional photographer since 1999. My father introduced me to photography at an early age, and we had a dedicated darkroom in our house. I knew how to dodge and burn an image by the time I was 8. I spent countless hours on wildlife and location shoots with him. Photography has been a constant in my life since I was young. It's important to find locations that are well known because the transformation has more impact that way. Before focusing on photography, I was a graphic artist. I've designed everything from corporate identity systems, storefronts, packaging, and websites. I've even illustrated a book.

What inspired you to create the Reclaimed series and the Dark City series?

As a photographer, I attempt to show the viewer their city in a different way, making the well known seem new again. I really enjoy when people see my more traditional images and rediscover the beauty of their hometown viewed with a different perspective. The Reclaimed series and Dark City series are an extension of that concept. Both series offer a different perspective on the known landscape. I also think people enjoy seeing the transformation. The Reclaimed Cities series imagines what the Capital District would look like if it were completely abandoned. The Dark Cities series shows what our nighttime sky would look like if there were no light pollution or electricity. Honestly, it's a great deal of fun to build these images.

For those photos, is it all about getting the right photo to start with, or is it mostly post-processing to create effects?

It's a combination. Sometimes I have a preconceived idea and go out and find the right image, sometimes I stumble upon the right setup. It's important to find locations that are well known because the transformation has more impact that way. I often Google how something is constructed so I can destroy it accurately in Photoshop.

What is your process like for creating a photo like those in the Reclaimed and Dark City sets?

It's an evolution. The images grow in complexity as I add more detail in an effort to make them as realistic as possible. I often Google how something is constructed so I can destroy it accurately in Photoshop. Images usually take between 3-5 hours to compete after the initial base image is captured. The completed Photoshop images often have hundreds of layers. What's your favorite project that you've worked on recently and why? I love shooting severe weather. Shooting weather brings together science, technology, art and logistics. It's also really, really fun.