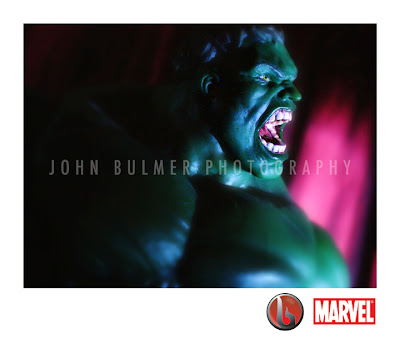 This guy has been kicking around the studio for years. He used to live on my desk at a job I really didn't like.† He faced out to greet anyone who entered my office. His expression told the whole story, I raged vicariously through him.

Growing up with a darkroom and studio in the basement of our house, my father and I used to build elaborate miniature photographic scenes with Star Wars action figures, painted Styrofoam planets, and poster board. In retrospect, our visual effects were slightly less ghetto than the original Star Trek. In attempt to keep shooting and stay out of the concrete gray upstate weather, I scheduled a little photo time with Mr. Hulk. I chose a studio backdrop that would best set off his profile and mimic the color of his tattered shorts.

Really, who am I kidding? Like trying to assign meaning to reality TV on deep cable, I am just wasting time. There are no lessons for the outer world when someone is voted off the island. But wasting time is sometimes fun too.

* I wanted to name this post Some Kind of Monster until I realized it was the name of that documentary about that bad metal band and their millionaire personal dramas.

† I'm contractually prohibited from mentioning the name of the firm. Upon my departure, there was a mutual agreement that this firm would not defame me and in turn, I would not speak of their corporate secrets.