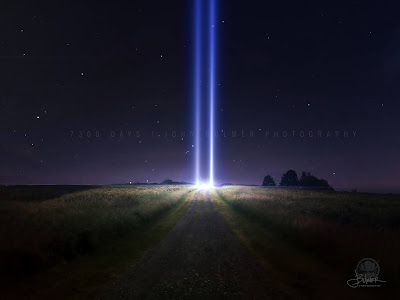 [ 7 3 0 0 D A Y S ]
Exactly 7,300 days ago was a bright and cloudless Tuesday morning in the Capital District. At just about 8:30 AM, cars filled the southbound lanes of the Northway as rush hour was in full swing, busses picked up kids in new clothes on their way to a school year that was only a few days old, and people settled in for a beautiful late-summer day in Upstate New York. It was one of those days that make the fall such a special place here with cool mornings and hot afternoons. Morning fog in the valleys and warm, spectacular sunsets in the evenings. Gas was $1.51 per gallon although local media was running stories about the possibility of a price increase. Cars were boxier and cell phones only made voice calls.

The day started out as a Tuesday like any other Tuesday.
None of us knew what was happening above our heads.

5.7 miles into the sky, 30,400 feet above the Capital Region, an American Airlines 767 carrying 92 people briefly transited our area on the way to Lower Manhattan. At 8:21 AM American Airlines Flight 11 crossed over into New York State from Massachusetts just south of the town of Nassau. 3 minutes later, ATC at Albany International received a transmission from a hijacker on board, probably mistaking an open radio line for a cabin intercom. Two minutes after that, at 8:26 AM, the 767 flew directly over Albany International before banking southeast over downtown. Media reports speculated that the hijackers used the Hudson as a navigational aid in locating New York City, however, NTSB evidence shows the plane remaining west of the Hudson until the town of Catskill before making a gentle arc southeast over Dutchess county, passing over Millbrook before adjusting the precision of its path and banking southwest as the centerpiece of the world’s most famous skyline appeared over the horizon.

20 minutes after it crossed Albany airspace, American Airlines Flight 11 would cut a swath in floors 93-99 on the north side of the North Tower of the World Trade Center at the tip of Manhattan. The impact would sever ⅔ of the building’s support columns. Because of the unique construction of the towers, the exterior walls were largely responsible for supporting the weight of the buildings since the majority of the load-bearing supports were clustered at their core. While the towers were designed to withstand the impact of a 707, the largest plane at the time of their construction, they were never engineered for a challenge like this. It was always a matter of time from impact to collapse.

History will remember the world changing at 08:46:40 AM that Tuesday morning. It actually changed 30 minutes earlier somewhere over the Capital District.

The North Tower, with its iconic TV aerial, was the first building that was struck that morning and the second to collapse at 10:28 AM in a plume of dust and smoke that could be seen from space.

This image was constructed and captured just north of the Capital District, the light reaching up into the same air space that Flight 11 occupied for those few minutes on that September day 20 years ago. It’s entirely possible the plane could have seen these lights if time and circumstances were different, but the sky is empty now, much like that space in the New York City skyline. A beacon 20 years too late.

"No day shall erase you from the memory of time."
A quote from Virgil's Aeneid, which adorns the 9/11 Memorial Museum