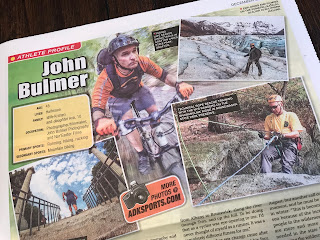 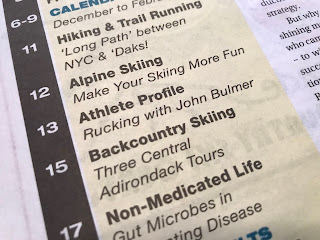 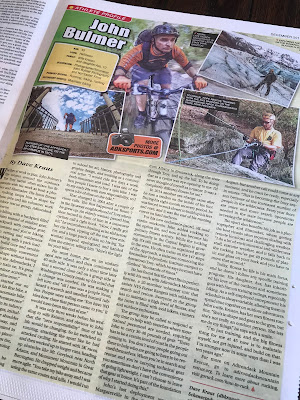 Whether at work or play, John Bulmer’s life rotates around the outdoors. The Troy native often mixes his fitness pursuits with his work as both a photographer and filmmaker. His latest fitness passion, rucking, keeps him in shape for both of those jobs and his volunteer work with an outdoor rescue group, Adirondack Mountain Rescue.

Rucking is hiking with a backpack filled with weight plates instead of outdoor gear. Fill up your backpack with outdoor gear, head to the mountains and you’re hiking. Stay in an urban setting and wilderness hiking becomes rucking, with a pack loaded with weights to build core and aerobic strength. “I find it incredibly convenient because I can get in shape without having to drive three hours to the Adirondacks. I go find stairs or a hill to train on. It’s great preparation for most outdoor activities. It helps me enjoy the mountains more.”

John’s fitness career started out on wheels in 1992, when he got his first bike, a “terrible neon green” Scott mountain bike. He immediately entered an “adventure race” in the Bronx, where the sport in its infancy included some unusual challenges, including riding mountain bikes on the shoulder of the four-lane Whitestone Parkway, and an obstacle where racers were required to disassemble their bikes, pass them piece-by-piece through the center of a tractor tire, then reassemble them before continuing the race.

After that unorthodox introduction, he spent the next decade riding while going to school for art, history, photography and graphic design, and working as a commercial artist. “I would ride five days a week, both mountain and road. I was one of the first people I knew to buy a spin bike. I was in my early 20s with zero responsibility, so I spent a lot of time on the bike.”

That changed in 2004 after a couple of close calls. The first happened on Route 7 in the Sycaway neighborhood of Troy where he grew up. An elderly woman passed him, then turned in front of him in a maneuver cyclists call a right hook. “Wow, I really got hit,” he remembers thinking as he slid across her car hood, ripping off the rearview mirror, and a large patch of skin on his leg. The woman stopped, apologized, and handed him the mirror, telling him “Here’s the light for your bike.”
He went home, put on an undamaged new wheel, and then continued his 40-mile ride. It was only a short time later that a second close call on a group ride in Washington County made up his mind that a change was needed. He was making a left turn and “all I saw was a purple Neon, heard a screech and smelled burned rubber. People were telling me ‘You have NO idea how close that person came to you.’ It would have been the end of me.”

It was only three weeks before his wedding to wife Kristen, and obvious to John that the “zero responsibility” time of his life would be changing. So he switched to running, attacking the sport like he had attacked cycling. He started with 5K races, and then worked up to longer runs, heading up obstacles like Mt. Greylock near North Adams, and Monument Mountain in Great Barrington. He dropped weight and became more agile. “You take my bike away and I was using the same routes and hills. I would run from Albany to Brunswick, along the river through Troy, and up the hill. To be doing that as a cyclist was eye-opening to me. I’d never thought of myself as a runner. It was a completely different fitness for me.”

In 2014 another sea change came after he tore a tendon on the inside of his foot. During his eight-month recovery period, he was forced to work slower to build up his feet and core, and it was the end of his running career on hard surfaces.

For his new endurance-paced, off-road cardio workouts, John added rucking to the option list, and now it has become his primary fitness activity. While the rucking community in the Capital Region is growing, it’s still small, with no organized group in the area. He often trains on the 147 steps of the Approach, a staircase connecting the Rensselaer Polytechnic Institute campus to downtown Troy, which he says he must have climbed “thousands of times.”

He has found that the sport fits in perfectly with his work with Adirondack Mountain Rescue, a 20-member volunteer unit that assists NYS Forest Rangers with wilderness search and rescue. Everyone in the group has to maintain a high level of fitness, and the roster is filled with avid hikers, runners and outdoor enthusiasts.

The group may be called to respond at any time to help with searches where more trained personnel are needed, requiring John to carry 30-40 pounds of gear. “There has to be a certain level of trust in the people coming in. You don’t want people going out there to help who are going to have to be rescued themselves. When you’re in search and rescue and you’re carrying technical gear you sometimes don’t have the convenience of going lightweight. I can’t choose to leave that gear at home. It’s part of the foundation of why I started doing this.”

John’s last deployment was near Margaretville in the Catskills in early August, but another call could come at any moment, and he must be ready, especially in winter. “This is becoming the busy season because of the increased number of people in the wilderness. Every year there are more and more search operations needed in the state because people are accessing the wilderness.”
The sport also benefits his job as a photographer and filmmaker, where getting the best visuals often requires dealing with remote locations and challenging weather. “I do a lot of environmental and wilderness stuff, extreme weather, and it falls back to the rucking. You’ve got 40 pounds of plastic and glass on your back and you have to move that around.”

Today, fitness for life is his main focus, and he doesn’t follow any specific training program. His daughter, Ava, has inherited his love of the outdoors and sometimes goes with him on training outings, especially hiking. As a self-employed entrepreneur his schedule is always variable, allowing them to spend time together on outdoor adventures. John’s wife, Kristen, has her own fitness routine. “She’s in shape and goes to the gym, but she’s not really an outdoor person. She lets me do my things,” he says with a smile.

“I’m just training, and the big fitness thing for me at 45 now is to maintain myself, not get injured, and build on that. I’m stronger now in some ways than I was ten years ago.”
For more on Adirondack Mountain Rescue, go to adirondackmountainrescue.org. To learn more about rucking, visit goruck.com/how-to-ruck.

Dave Kraus (dbkraus@earthlink.net) of Schenectady is a longtime area cyclist, photographer, and writer who had no idea what rucking was before writing this story. Visit his website at krausgrafik.com.

Thanks to Adirondack Sports Magazine for featuring my profile in the December 2017 issue! It was a fun conversation about fitness, rucking and search and rescue. You can read the online version here: https://www.adksports.com/2017-12-athlete-profile